Commencement of submission of application: 19 April 2021

Last date for submission of application: 17 May 2021

Educational Qualification: Candidates must be BDS (with minimum 55% marks in final year BDS)/MDS having passed from a College/University recognized by the Dental Council of India (DCI). He/she should have completed a one-year Compulsory Rotatory Internship, as mandated by DCI, by 31 Mar 2021 & must be in possession of a Permanent Dental Registration Certificate of State Dental Council/DCI valid at least up to 31 Dec 2021. The candidates (BDS/MDS) who have appeared in the National Eligibility-cum-Entrance Test, NEET (MDS)-2021 conducted by the National Board of Examinations (NBE), New Delhi, under the aegis of the Ministry of Health & Family Welfare, GoI, on 16 Dec 2020, at various examination centres of NBE, are eligible to apply. Candidates must submit a copy of the Mark-sheet/Score card of NEET (MDS)-2021 along with the application.

How to apply for Army Dental Corps 2021

During operations or counter insurgency (CI), soldiers of PARA and PARA (SF) Regiments are assigned with the tasks, of special nature which demand very high standards of physical and mental fitness. Soldiers as per the training at the respective battalions after clearing their probation and based on their aptitude, they may undergo specialization training in any of the following :-
Elite Status to the Para and Para (Special Forces) of Indian Army. The Paratroopers of Indian Army by virtue of the tough selection, rigorous training and continuous deployment in Counter Insurgent area are given the elite status in the whole organization. They wear maroon beret  which distinguishes them from the rest and is a recognition of the ELITE across all armies of the world.

Allowances and Benefits for PARA and PARA(Special Forces).

Monetary Benefits for the Indian Army PARA and PARA(Special Forces) regiments. Compared to standard Indian Army allowances which are authorized depending on the sector where an individual serves, a soldier of Sepoy rank in the Special Forces unit will get Rs. 17,300/- P/M as Special Forces Allowance and Rs. 6000/- P/M in Para Battalion as Para Pay. They also get exposure with Foreign Armies in different military exercises. An Officer and Soldier being in the PARA/ PARA (SF),generally an individual gets an exposure of serving / training with foreign Armies.
A fully trained Soldier in PARA Regiment of Indian Army, has a sound working knowledge and advanced knowledge on one or more of the following
skills :-

Selection Process for Recruitment into PARA Regiment of Indian Army

1. The Candidates  attaining 100% marks in Physical Fitness tests and 50% marks in Written Test and comes in merit will be given an option of joining the ELITE PARA Regt by Army Recruitng Offices (AROs) just prior to their despatch. These volunteers candidates will be subjected to additional tests for selection for PARA Regt of Indian Amry.
2. The Candidates who have made decision of joining the PARA Regt will have the assurance of joining the already allotted Parent Regiment if they fail to qualify in the special screening tests for PARA Regiment.
(c) Volunteers  Candidates  selection will be subjected to special tests as stated below : (Candidates have to achieve these standards to qualify)
Physical Test
5 Km Run       20 Mins
Chin Up          14
Push Up          40 reps in 1 Min
Sit Up              80 reps in 2 Mins
Mtr Shuttle     17 times in 01 Min
These are broad guidelines by Indian Army website to join Para Special Forces
Download Online Benchers App
Also Read:

Indian Army Rank Structure: Ranks in Indian Army provide a system of leadership that indicates a Soldier’s level of expertise, responsibility and authority. As they say in Indian armed forces ” You wear your heart on your sleeve and your resume on your uniform”. Rank defines a soldier while Insignia is a distinguishing mark and a badge of authority or honor. 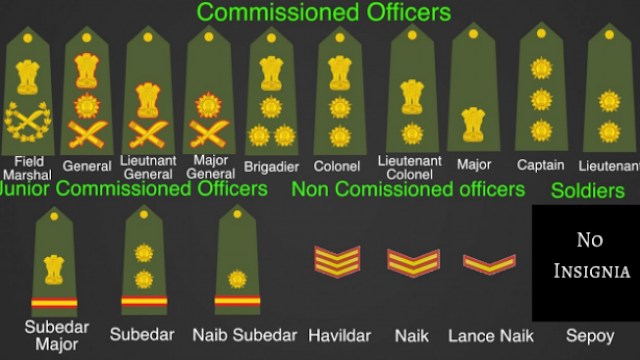 The promotion is based on selection. Although commissioned, they would be considered as senior enlisted personnel.
SUBEDAR
Insignia– Two gold stars with stripe

The selection is based on promotion.

The selection is based on the promotion. The soldiers holding JCO rank receive a commission from the President of India.

Complete List of Military Exercises of Indian Armed Forces: The term Military exercise is means large-scale a involvement of military forces from multiple countries or commands. It is designed to demonstrate the level of alliance between those forces and their ability to coordinate. Here we will give you an insight of various exercises conducted by Indian Army with militaries of different countries.

Indian Army TGC Recruitment 2021: Finally Indian Army has released the  notification forthe Technical Graduate Course (TGC-133) on February 25, 2021, at the official website @ joinindianarmy.nic.in. Only male unmarried candidates are eligible to apply for the 40 Vacancies of TGC 133 course commencing in July 2021 at the Indian Military Academy, Dehradun (IMA) for permanent commission in the Indian Army.  Check all details in this article regarding Indian Army TGC 133 Entry.

TGC has vacancies in the following Engineering disciplines. The total no. of vacancies that have been notified is 40.

Pay Scale of Indian Army TGC 2021 is given in the table below.

Military Nursing Service 2021 Notification: Indian Army has published the advertisement  for admission to 4 years B Sc. (Nursing) Course 2021. Eligible and interested female candidates can register for MNS Recruitment 2021 from 17 February 2021 to 10 March 2021. Online Applications will be welcomed on official site of Indian Army – joinindianarmy.nic.in.

Competitors probably passed in the primary endeavor, Senior Secondary Examination (10+2) or same (12 Years tutoring) assessment with Physics, Chemistry, Biology (Botany and Zoology) and English with at the very least half total imprints as a customary understudy from a Statutory/Recognized Board/University/Examination Body. Up-and-comers who will show up for conclusive year of qualifying assessment during the current scholastic meeting may likewise apply temporarily

There will be objective type questions on Physics, Chemistry, General Intelligence, Biology and General English. The length of the test is 1 hour and 30 minutes.

On the basis of CBE merit, candidates will be called for interview during Jun 2021

Final selection will be based on combined merit of CBE & interview, subject to medical fitness.

How to Apply for Military Nursing Service 2021 ?

Eligible and interested candidates can apply for Indian Army Nursing Recruitment from 17 Feb 2021 to 10 Mar 2021 on joinindianarmy.nic.in

Rs. 750/ – . Up-and-comers may pay the application expense online as it were

Important List of Dams and Reservoirs in India: Check here

List of National Parks in India: Important for AFCAT 2021

Indian Army 45th 10+2 TES Recruitment 2021  online application will end on 2 March 2021. The candidates after final selection will get permanent commission in the Indian Army after four years of basic military training and technical training thereafter.

Indian Army 45th 10+2 TES vacancies are to be announced

Educational Qualification: The candidates who have passed 12th/10+2 or equivalent exam with Physics, Chemistry and Mathematics (PCM) with more than 70 % are eligible to apply for Indian Army 10+2 Technical Entry Scheme.

Also Read:
Officer Like Qualities in SSB: How to Develop them

Candidates who joins Indian Army, Navy or Air Force are first required to experience and complete Cadet Training at their respective academies. During the training, Officers and the equal post officials in Navy and Air Force are qualified to get Fixed Stipend of Rs 56,100 every month, which the beginning compensation in Level 10.
The training period is not considered as the commissioned service.  Once the candidates are commissioned successfully,  they get all the arrears remaining on the basis of their pay matrix with effect from their training period.

Apart from a decent salary package, the officers are eligible to get a few Allowances such as Flying Allowance, Dearness Allowance, High Altitude Allowance, Uniform Allowance, etc. Below we have provided the allowances and perks of Officers.

The promotion avenues are different in all the armed forces. Have a look at the promotion policies for officers recruited in Indian Military, Navy, OTA and Air Force below:

Male and Female candidates who are granted with the Short Service Commission by the OTA are eligible for the following promotion avenues:

Captain – On completion of 2 years of commissioned service

Major –  On completion of 6 years of commissioned service

Lieutenant Colonel – On completion of 13 years of commissioned service