Candidates must possess the given educational qualifications and age limit to apply for the HPSC HCS examination.

Candidates must possess a bachelor’s degree in arts/commerce or science from a recognized university.

Should not be less than 21 years and not more than 42 years.

Candidates are required to pay the given application fee to apply for HPSC recruitment.

The selection process for Haryana includes 3 stages as given below:

The mains examination consists of 600 marks and candidates qualifying in mains will be called for the personality test.

SSC CPO SI Result 2020 Paper 1: The Staff Selection Commission conducted Computer Based Examination for recruitment of Sub-Inspectors in Delhi Police and CAPFs Examination, 2020 (Paper-I) from 23.11.2020 to 25.11.2020. According to the latest result calendar released by SSC, the Paper 1 result of the SSC CPO 2020 exam is declared on 26th February 2021.

How to check your SSC CPO Paper 1 Result?

Based on the cut-off fixed by the Commission in Paper-I, number of candidates qualifying for appearing in PET/ PST are as follows:

*33-SC, 06-ST, 431-OBC and 72-EWS candidates qualifying at UR cut-off have been shown under their respective categories.

Marks of the qualified/non-qualified candidates will be uploaded on the website of the Commission on 03.03.2021. This facility will be available from 03.03.2021 to 24.03.2021. Candidates may check their individual marks by using their Registration No. and registered password and click on Result/ Marks tab on the candidate

ARHMD System for Indian Army: All you Need to Know

ARHMD System for Indian Army: Augmented Reality Head Mounted Display (ARHMD) System is conceived as a capability enhancement to Land Based Air Defence Weapon Systems such as IGLA shoulder fired Infra Red Homing Air Defence Missile System and ZU 23mm 2B AD Gun System which will provide the operator with radar and Thermal Imaging (TI) sight outputs as overlays. The proposed system intends to enhance the engagement capability during night and conditions of inclement weather and the day-time engagements are also intended to be enhanced through increased reaction times, data computation for decision support and integration of output of TI sight.

Indian Army is in the process of acquiring niche technology by procuring quantity 556 Augmented Reality Head Mounted Display (ARHMD) Systems under Make-II Category. After successful evaluation of vendor responses, Project Sanction Order (PSO) has been issued on 22 February 2021 to six vendors to start developing the prototype. The contract will be placed with one of the firms post successful development of prototype as per provisions of Buy (Indian-IDDM) category of DAP 2020.

Development of Augmented Reality Head Mounted Display System under Make-II will be a game changer for Indian Army. It will be in sync with “Atmanirbhar Bharat” policy of the Government and will lead to “Self Reliance” by giving boost to the Indian Defence Industry.

IB ACIO Tier-1 Answer Key 2021: Candidates who appeared for IB ACIO Exam on 18th, 19th, and 20th February 2021 can now see there responses on official website. Ministry of Home Affairs has released the answer key for IB ACIO tier-1 Exam. Along with the answer key, the candidate’s response sheet is also available on its official website. The candidates who have appeared in IB ACIO Tier-1 Exam can download their answer key by logging with their registration number  and password.

Candidates can follow the steps below to check the answer key of the IB ACIO Tier-1 Exam.

IB ACIO Tier-1 Answer key 2021 has released for the Tier 1 exam on its official website @mha.gov.in. The test comprises questions from General Awareness, Quantitative Aptitude, Logical/analytical ability, and English Language. The total marks of the test are 100.

SSC CGL Vacancy 2020: A total of 7035 tentative Vacancies for SSC CGL 2020 have been released by Staff Selection Commission released  in which 2891 vacancies have been declared for the General category. The vacancies have seen a decrease as compared to SSC CGL 2019, where a total of 8582 vacancies were notified.

A total of 7035 vacancies have been notified by the Commission for SSC CGL 2020 Exam . The vacancy is tentative and can be increased further until the final appointment of candidates is done. 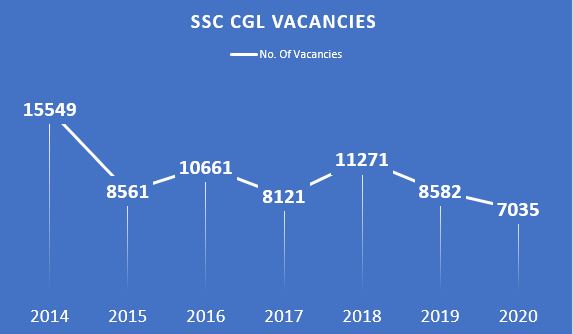 In the table below, we have given you the analysis of last seven years vacancies. 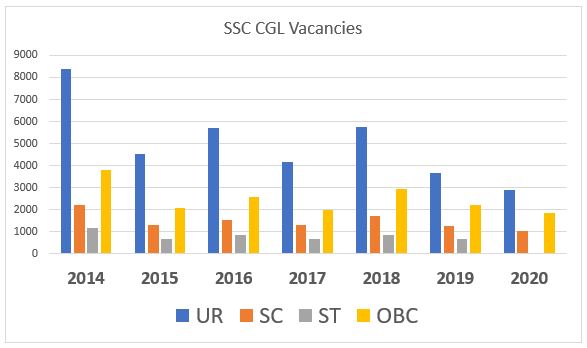 There are several posts and departments in which vacancies are released by the SSC. The Pay level varies according to the posts. Check out the vacancies released by SSC in each department and post: 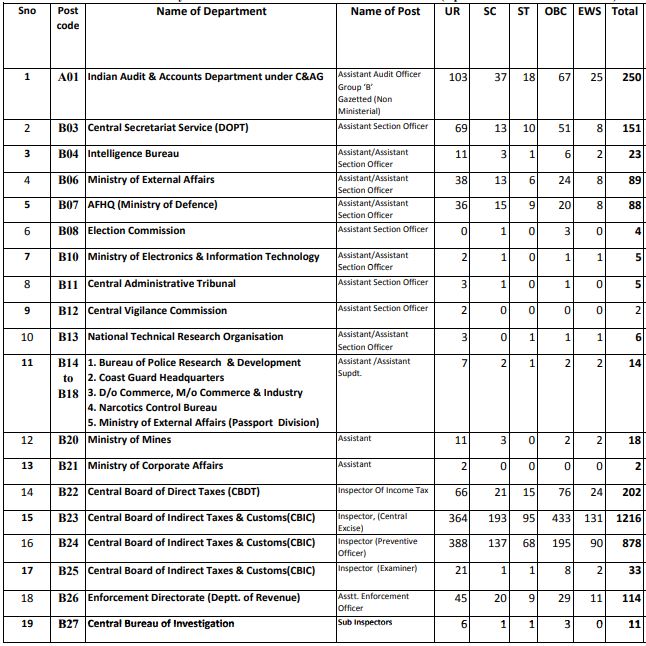 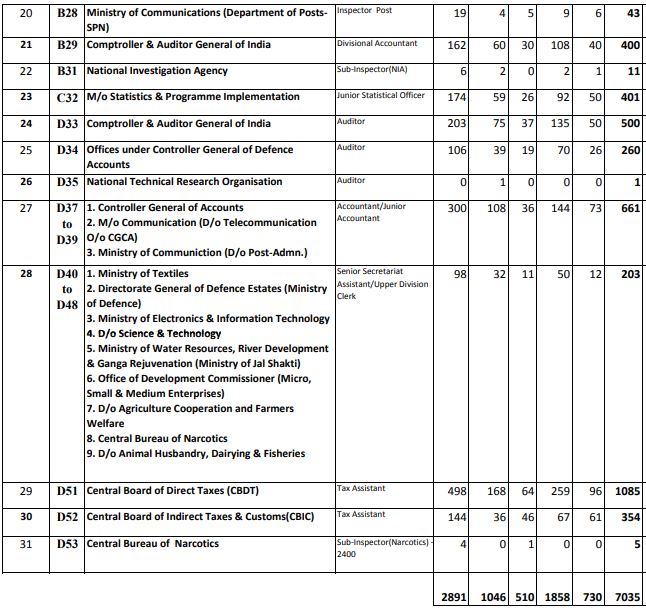 The Pay level, post wise, and departments are provided in the table below.

All these acquisition proposals will be indigenously designed, developed and manufactured. These will include inter-alia platforms and systems designed and developed by Defence Research and Development Organisation (DRDO).

To meet the Atmanirbhar Bharat goals of the Government on time-bound defence procurement process and faster decision making and to systematically work towards reducing the time taken for capital acquisition, the DAC also approved that all capital acquisition contracts (delegated and non-delegated) other than D&D cases shall be concluded in two years. The Ministry, in consultation with the Services and all stakeholders, will come up with detailed plan of action for achieving the same.

DRDO conducted two successful launches of VL-SRSAM: All you need to know

In his inaugural address, Defence Minister Rajnath Singh congratulated DRDO for this significant step in the field of fire safety. He emphasised that in any fire tragedy the nation loses precious lives and valuable assets. To prevent such losses, this Training Centre will go a long way in ensuring quality training to the personnel and preventing such mishaps.

The first of its kind in India, the SDC has been created by adopting state of art technology and setting up of simulation systems for validation of fire at realistic scale in order to meet the challenges and enhance the skills of Defence Fire Service Personnel and combatants from the Armed Forces. Spread in 24 acres area at Pilkhuwa, the DRDO facility would be utilised for imparting fire prevention and fire-fighting training to the Fire Service personnel of Indian Armed Forces, DRDO, Ordnance Factories, Coast Guard and defence undertakings. In addition, trainees from Bhutan, Sri Lanka and other neighbouring countries would also be imparted training at the Centre. The facility is likely to strengthen their knowledge and fire-fighting skills and prepare them for handling fire threats in the emerging high-tech environment. Training of fire personnel in such high standard facilities will result in high levels of fire safety awareness and implementation of safety provisions in defence establishments thus leading to minimisation of losses and property due to fire accidents.

Constructed as per International standards, the SDC has four bays with fire-fighting and rescue appliances such as hydraulic platform, air crash fire tender and emergency rescue tender, which will be used for imparting practical/hands-on training besides an important life-saving personal protective equipment for the fire fighters. The Centre has a Fire Drill Tower with emergency escape chute which would be used for simulation of fire in high rise buildings, Breathing Apparatus Training Facility, a Model Fire Station housing specialised fire-fighting and rescue appliances, LPG Petroleum Tank Farm Simulator, Fire Suit Test and Evaluation facility, a Hostel and Transit Facility and Administrative and Training Facility. The facility would be maintained by CFEES, which carries out safety audits, training activities and R&D activities in the area of fire, explosive & environment safety. Every year 400-500 personnel are being trained by CFEES in modules customised to the needs of Ministry of Defence (MoD) establishments.

Secretary Department of Defence R&D and Chairman DRDO Dr G Satheesh Reddy in his address appreciated the endeavor of the CFEES towards indigenisation of fire safety equipment and test facilities for evaluation of fire safety products. He stated that the establishment of Skill Development Centre is another step initiated by DRDO towards endorsing Prime Minister Shri Narendra Modi’s call for ‘Atmanirbhar Bharat’.

DRDO conducted two successful launches of VL-SRSAM: All you need to know

The launches were carried out today from a static vertical launcher from Integrated Test Range (ITR), Chandipur off the coast of Odisha. Indigenously designed and developed by DRDO for Indian Navy, VL-SRSAM is meant for neutralizing various aerial threats at close ranges including sea-skimming targets.

The current launches were carried out for demonstration of vertical launch capability as part of its maiden launch campaign. On both occasions, the missiles intercepted the simulated targets with pinpoint accuracy. The missiles were tested for minimum and maximum range. VL-SRSAM with Weapon Control System (WCS) were deployed during the trials.

The launches were monitored by senior scientists from various DRDO labs involved in the design and development of the system such as DRDL, RCI, Hyderabad and R&D Engineers, Pune.

The present trials have proved the effectiveness of the weapon system and few more trials will be conducted shortly before deployment on Indian Naval ships. Once deployed, the VL-SRSAM system will prove to be a force multiplier for the Indian Navy.

The Helinaand Dhruvastra are third generation, Lock on Before Launch (LOBL) fire and forget Anti-Tank Guided Missiles that can engage targets both in direct hit mode as well as top attack mode. The system has all-weather day and night capability and can defeat battle tanks with conventional armour as well as with explosive reactive armour. It is one of the most-advanced anti-tank weapons in the world. Now, the missile systems are ready for induction.

Important List of Dams and Reservoirs in India: Check here

INS Pralaya, the second ship of the indigenously built Prabal Class Missile Vessels, was commissioned in the Indian Navy on 18 December 2002. The 56 m long ship, displacing about 560 T is capable of speeds in excess of 35 knots and is fitted with an impressive array of weapons and sensors. These include a 76.2 mm medium range gun, 30 mm close range guns, chaff launchers and long range surface to surface missiles. The ship, built indigenously at Goa Shipyard Limited, bears testimony to capabilities of the Indian ship building industry and is a versatile platform capable of performing a wide variety of surface warfare missions.

Participation of INS Pralaya in NAVDEX 21 and IDEX 21, one of the leading international naval and defence exhibitions of the region, is aimed at showcasing the strengths of India’s indigenous ship building, in line with Hon’ble Prime Minister’s vision of ‘AtmaNirbhar Bharat’. In addition, participation of an Indian Navy Ship in NAVDEX 21 and IDEX 21 also highlights close relations between India and UAE.

Defence relations between India and UAE have been steadily growing since the upgradation of bilateral relations to a ‘Comprehensive Strategic Partnership’ during the visit of Crown Prince of Abu Dhabi, His Highness Sheikh Mohamed bin Zayed Al Nahyan in January 2017 as Chief Guest at India’s Republic Day celebrations. Towards enhancing interactions between the two navies, inaugural edition of Indian Navy – UAE Navy bilateral exercise GULF STAR – 1 was conducted in March 2018. The next edition of the exercise is likely to be conducted in 2021. In addition, Indian Navy ships have been making regular port calls at UAE for promoting maritime cooperation. INS Mysore, an indigenously built guided missile destroyer, mission deployed in the region, is also making a port call at Abu Dhabi, UAE from 19 to 22 Feb 21.

HAL hands over five ALHs Mk III to Indian Navy and Indian Coast Guard: All you need to know